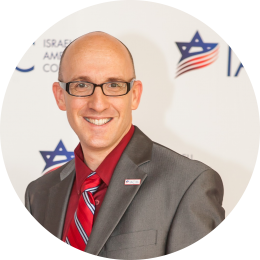 Sagi Balasha served as the National CEO of the Israeli-American Council (IAC) from 2011 to 2015. During his tenure, together with the IAC Board of Directors, he grew the organization from a small, local operation with seven employees and one office to a national operation employing eighty full-time staff spread across nine offices in major cities around the Unites States. Towards the end of his tenure, the IAC became a premier organization within the American Jewish landscape that services close to 200,000 people.

In August 2015 the Balasha family returned to Israel.  Today, Sagi provides business development and project management services to multiple organizations. His major focus is the development of Israel-based projects combatting the demonization and delegitimization of Israel within the cyber realm.

Prior to his position as IAC CEO, from 2006-2011, Sagi served at Beit Hatfutsot as VP of Finance and Development. There he headed a financial recovery plan that brought the institution from a state of deep deficit, to a state of comprehensive and consistent development. During his tenure, he increased the growth of the museum’s budget, space and visitors by more than 100%. From 2001-2006, Sagi worked in the Israeli Ministry of Finance Budget Department as Department Manager and later as Department Director, where he oversaw 20% of the government budget and was involved in major structural changes and reforms.

Sagi holds a B.A. with honors in economics and geography from Ben-Gurion University in Beer Sheva and earned his M.A. at the Hebrew University in Jerusalem.