Living Bridges for the Jewish People

The days between Holocaust Remembrance Day and Israel’s Independence Day take us back to a decade of tragedy and triumph for the Jewish people—a decade that witnessed both the darkest and brightest moments in our history. This is intentional. Yom Hazikaron, Israel’s Day of Remembrance, occurs just before our Independence Day to remind us that the Jewish State wasn’t handed to us on a silver platter. Instead, it is a precious gift that can never be taken for granted.

My first Yom Hazikaron in America was a wakeup call. I arrived at American Jewish University (AJU) in Los Angeles as a student, less than two years after serving with the IDF in southern Lebanon. At the forefront of my mind was the memory of the special operation “Closing Gap,” during which three officers in my unit in the Paratroopers were killed, including my commander, Major Eitan Belachsan.

In Israel, the whole world stops to remember. In America, it wasn’t the same. In Los Angeles, there were a few ceremonies to commemorate Yom Hazikaron, but none that attracted many young people. At that point, there was no opportunity to share with the young generation the sacrifices that have been necessary to secure a free and thriving Jewish state. 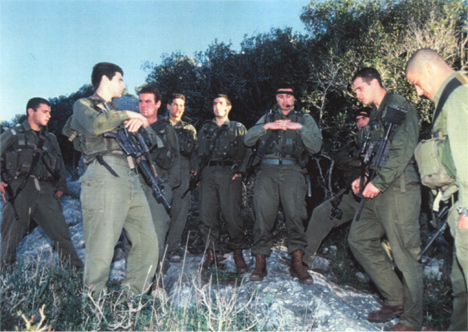 In the photo: Shoham standing in between Eitan and Liraz, during our final preparations before the operation.

I knew that if I had the urge to tell Eitan’s story, others must feel the same way about people that they had known. But beyond telling our personal stories, I felt we had an opportunity to bring “Israeliness” to campus. I wanted my fellow students to feel what Israelis feel on that very solemn and special day.

With the help of Zofia Yalovsky, other Israeli-Americans, and the support of the university administration, we created a Yom Hazikaron ceremony at the AJU, which I led for six years.

We stood still while a siren played. We raised the Israeli flag. We recited poems in Hebrew and English and told stories of fallen soldiers. Every year, I had my five minutes to tell Eitan’s story.

For one hour, once a year, it felt like being in Israel, not only for those of us who were born in the Jewish State, but also for hundreds of Americans, including many Jewish college and high-school students.

That ceremony was the beginning of something much bigger for me. I recognized the role that Israeli-Americans could play as living bridges between our new home and our ancient homeland. I began to see our historic responsibility to close the gap between Jews in Israel and in the Diaspora—to serve as an example, in the flesh, of what Israel could offer to the Jewish community and to the world. The ceremony was the beginning of many more opportunities to connect the students to Israel through Israeliness.

A few years later, I joined with several others to co-found the Israeli-American Council (IAC), working to bring Israel and Israeliness to the Jewish community at a much larger scale. Even today, nine years later, we are blown away by the potential impact that Israeli-Americans can have when we were organized and united.

Fast forward. Today the IAC is the fastest-growing Jewish organization in the country. A couple of weeks ago, I went to the AJU again. This time, to tell Eitan’s story to a group of Israeli- and Jewish-American high school students. They are part of a new program we launched, called IAC Eitanim in his memory. It uses an Israeli-inspired project-based learning model to teach Jewish high school students character, leadership and innovation—the same skills that Eitan taught our unit. The annual IAC Eitanim Hackathon will take place at the AJU as well. For me, the experience was all about closing a full circle.

In a short time, Israeli-Americans have come a very long way in assuming responsibility for building and enriching our broader Jewish community in the United States. Yet, I believe that we have just scratched the surface of what is possible. By linking the Jewish people across cultures and continents, Israeli-Americans will play an even greater role in the Jewish story for decades to come.

This year, the IAC will be hosting Celebrate Israel festivals for more 50,000 people in six cities across the nation. The festivals have been exceptionally popular not just with Israeli-Americans, but with the broader community as well—and have grown rapidly as a result. Why? Because Israeli-Americans are uniquely equipped to create and share an authentic experience, enabling others to celebrate Yom Haatzmaut as if they were in Israel. It is not only a joy, but a privilege to celebrate the Jewish State in this way with our broader community. More than that, it is our duty to show unity and support for the 68 year-old country that wasn’t handed to us on a silver platter.