10 Things You Need to Know About BDS


1) BDS is not new. Boycotting Jewish businesses started in 1922

2)  The BDS movement lobbies governments, businesses, and individuas to boycott, divest from, and sanction Israel

Boycotts, divestment, and sanctions (BDS): are the tactics of political warfare used against Israel, based on the exploitation of human rights, double standards, comparisons to apartheid South Africa, and false accusations of “war crimes.”

Boycotts: of products, culture, and academics –
BDS activists lobby stores not to carry Israeli products and encourage others not to purchase them. They send letters to artists, musicians, authors, and academics, imploring them not to perform and appear in Israel or cooperate with Israeli institutions. Boycotts undermine liberal values, such as academic freedom and freedom of expression, by restricting openness and tolerance.

Divestment: from companies that do business with Israel –
Distorting the concept of ethical investing, nongovernmental organizations (NGOs) accuse companies that conduct business in Israel of involvement in war crimes and violations of international law. The NGOs approach investors, primarily large banks and pension funds, and push for the exclusion of these companies.

What started on 1 campus in 2003 has suddenly reached 28 campuses and university systems in 2015. And while most of the resolutions were defeated, the increase in proposed resolutions and debates on the subject is a worrysome trend.
BDS resolutions call upon their respective universities to divest from Israeli companies and to boycott Israeli institutions. They are very divisive among students and often lead to Jewish and Israeli students feeling isolated, discriminated against, and attacked.

4) Academic Associations are being targeted by BDS

5) BDS operates under the banner of promoting human rights but in reality seeks the elimination of Israel as a Jewish state:

• Co-founder of Palestinian Campaign for the Academic and Cultural Boycott of Israel (PACBI) Omar Barghouti (2004): “The current phase has all the emblematic properties of what may be considered the final chapter of the Zionist project. We are witnessing the rapid demise of Zionism, and nothing can be done to save it, for Zionism is intent on killing itself. I, for one, support euthanasia.”

• As'ad Abu Khalil, a central activist in the U.S. (2012): “Justice and freedom for the Palestinians are incompatible with the existence of the State of Israel.”

• Pro-BDS author Ahmed Moor: “OK, fine. So BDS does mean the end of the Jewish state.... I view the BDS movement as a long-term project with radically transformative potential....In other words, BDS is not another step on the way to the final showdown; BDS is The Final Showdown.”

6) BDS’ success lies in their ability to make a lot of noise.

The number of academics and cultural figures opposed to boycotts is much higher than the number of those supporting boycott, but BDS is very good at making the public think the opposite is true. 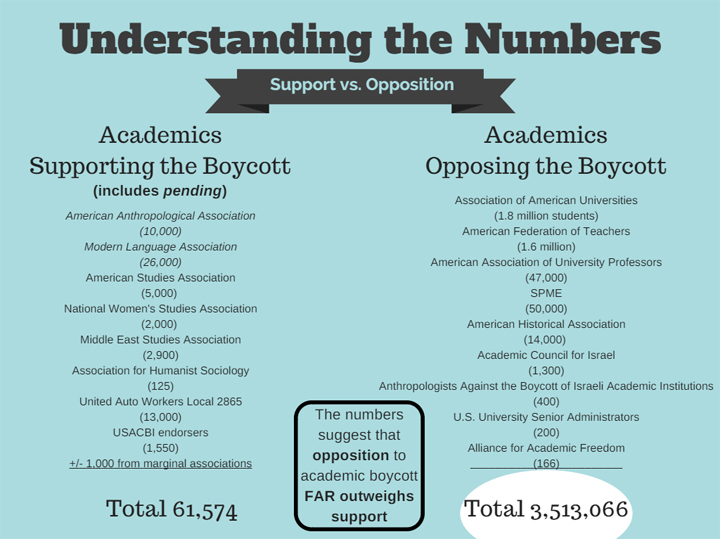 The apartheid South Africa analogy implies systematic racism which allegedly prevents non-Jewish Israeli citizens from occupying the same professions or using the same public transportation as Jewish Israeli citizens. This of course is an absurdly inaccurate claim and is very offensive to South African communities who suffered through actual apartheid. The following list illustrates that Israel is not in any way exercising apartheid

a) All Israeli citizens have full equal rights
b) Arab citizens occupy every profession including police chiefs, army commanders, parliament members and judges
c) Israeli universities are home to Arab and Palestinian students and teachers
d) Incitement to racism is a criminal offence in Israel
e) Arabs and Israelis receive the same treatment in Israeli hospitals
f) There is no separate transportation or other amenities for Jews and non-Jews, Israelis or Palestinians
g) Jewish and non-Jewish citizens of Israel are tried in court based on fact, not ethnicity or religion 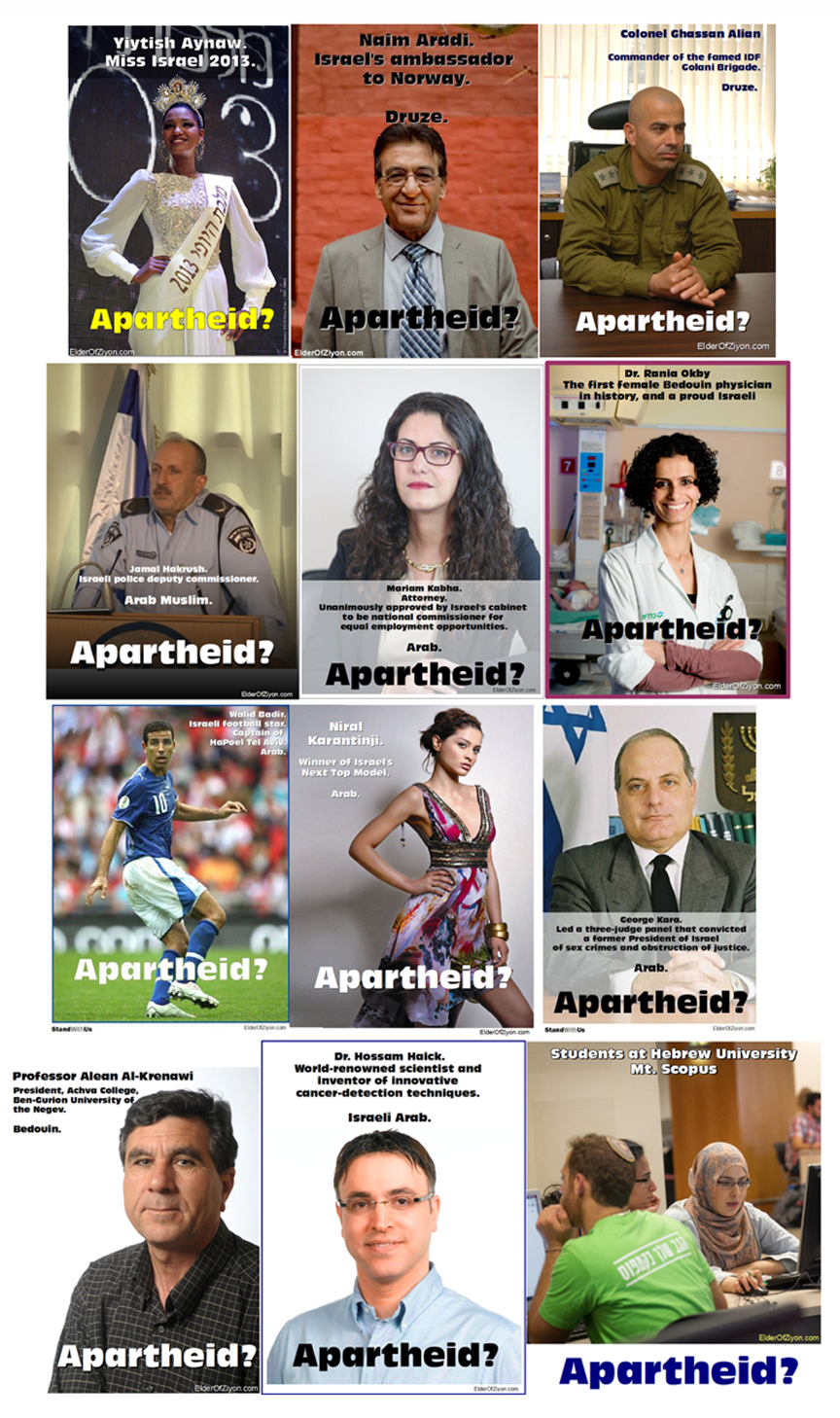 For more of Elder of Ziyon's "apartheid?" posters, visit http://bit.ly/EOZ-aw

8) BDS founders and supporters frequently contradict themselves, to the point of blatant hypocrisy.

They demand that all “people of conscience” boycott all Israeli products and institutions, while they themselves enjoy the benefits of Israeli goods. BDS co-founder Omar Barghouti studied at Tel Aviv University. Students for Justice in Palestine, the student group responsible for the majority of BDS activity on campus, uses WIX to build their websites (http://cornellsjp.wix.com/home, http://denversjp.wix.com/dusjp). And the rest undoubtedly use Intel, Microsoft, Apple, and many other products developed in Israel.

9) New legislation and policy in the United States, Canada, the UK, and France deems BDS discriminatory

These new laws prohibit public institutions from partaking in BDS activities and doing business with companies that boycott Israel.

10) Anti-BDS legislation is gaining support among the states

Since 2015, a number of states have begun passing anti-BDS legislation, condemning the boycott movement as discriminatory, and prohibiting the state from doing business with companies that engage in boycott of Israel or Israeli companies and institutions.