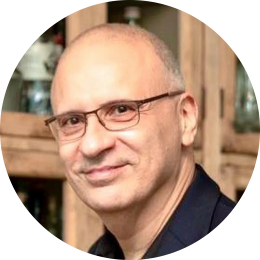 Dan Adler was born and raised in Israel to Polish-born parents who survived the Holocaust via deportation to Siberia. After serving in the IDF, Dan studied Electrical and Computer Engineering at the Technion in Haifa. He worked on several innovative microchips including the groundbreaking MC56000 which enabled the mobile phone revolution. In the late 1980’s Dan moved to the US to work on CAD software while completing his graduate studies at Rutgers University in NJ.

In the 1990’s Dan was recruited by a top wall street hedge fund and switched his career to developing advanced data, analytics, AI, and risk systems. In addition to hedge funds and a fintech startup, Dan has held technology leadership positions at leading wall street banks.

Dan is a performing jazz guitarist and has recorded several albums, as well as published reviews, papers, an open-source software project, and articles in the areas of Engineering, Machine Learning, Jewish history, and Jazz Education (http://danadler.com).

Dan and his wife Emily live in Manhattan. They have 3 grown daughters: Sivan, Keren and Talia, each embarking on an exciting career.