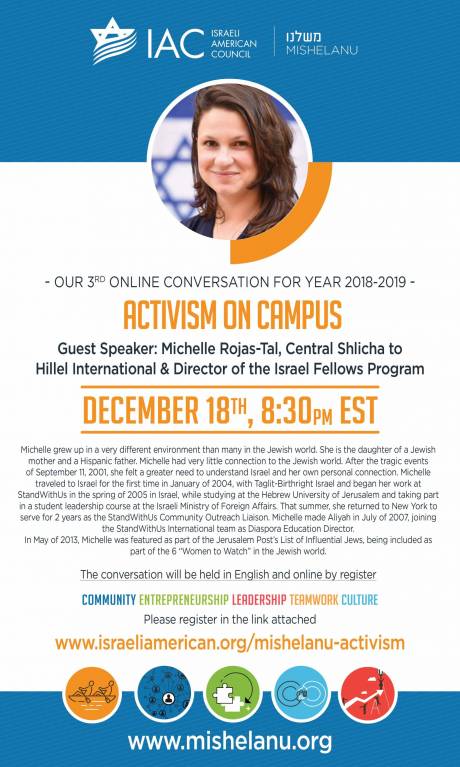 *This is an exlusive event for Mishelanu Fellows* Please note - The event time is 8:30 EST

Join us for our 3rd Zoom Conversation: ACTIVISM ON CAMPUS

We are excited to host Michelle Rojas, the Central Shlicha to Hillel International & Director of the Israel Fellows Program. Michelle grew up in a very different environment than many in the Jewish world. She is the daughter of a Jewish mother and a Hispanic father. Michelle had very little connection to the Jewish world. After the tragic events of September 11, 2001, she felt a greater need to understand Israel and her own personal connection. Michelle traveled to Israel for the first time in January of 2004, with Taglit-Birthright Israel and began her work at StandWithUs in the spring of 2005 in Israel, while studying at the Hebrew University of Jerusalem and taking part in a student leadership course at the Israeli Ministry of Foreign Affairs. That summer, she returned to New York to serve for 2 years as the StandWithUs Community Outreach Liaison. Michelle made Aliyah in July of 2007, joining the StandWithUs International team as Diaspora Education Director. In May of 2013, Michelle was featured as part of the Jerusalem Post’s List of Influential Jews, being included as part of the 6 “Women to Watch” in the Jewish world.