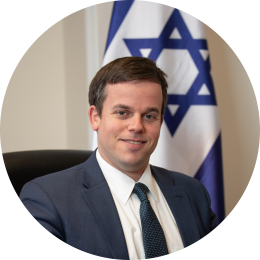 Roee Snir joined IAC in 2022. Prior to assuming his current role, Roee served for eight years on behalf of the Israeli Ministry of Foreign Affairs in the U.S., most recently at the Israeli Embassy in Washington, D.C. as the Chief of Staff to Ambassador Michael Herzog and prior to that as senior advisor to ambassadors Ron Dermer and Gilad Erdan.

Before coming to Washington, Roee worked at the Permanent Mission of Israel to the United Nations in New York dealing with Social and Economic issues and he served as the Political Director of the Consulate General of Israel to the Southeast United States in Atlanta.

Born and raised in Israel, Roee is a veteran IDF officer and finished at the top of his class in the IDF Officers School. He earned a degree in Political Science and East Asian Studies from Tel Aviv University. During his time in university, Roee founded the Israeli Model UN Association, the umbrella organization for all Model UN groups across Israel, and later served as its Vice President.

Roee is married to Joanna and has two daughters.