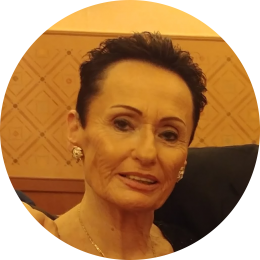 Ilana Israel was born and raised in Israel. She came to the US in 1972 when her husband was relocated by “Zim Lines” company and played an active role in Jewish and Israeli life since her arrival. After completing high school in Haifa, she served in Agaf Ha-Modi'in (Intelligence Corps of the Israeli Defense Forces).  After military service, she studied Early Childhood Education. After moving to the US with her husband, she began to volunteer her time with the Jewish Federation of Bucks County, where she sat on the board, assisted in major fundraising efforts, and helped direct the Young Leadership Committee. While there, she helped to form the Sunshine Committee, which organized volunteers to visit with elderly and ill community members. She also began teaching Nursery and Hebrew School in various synagogues in the greater Philadelphia area, which would become a passion that lasted 35 years. In particular, she taught at Temple Sinai (Dresher, PA) for 18 years (1995-2013), and sat on the synagogue’s Board of Education. At Temple Sinai, she oversaw community engagement and fundraising for the preschool and Hebrew School. Her lifelong passion has always been helping children and young people, and building a warm and nurturing Jewish community. She currently resides in Philadelphia, PA, and spends time with her husband Ben, two children and five grandchildren.