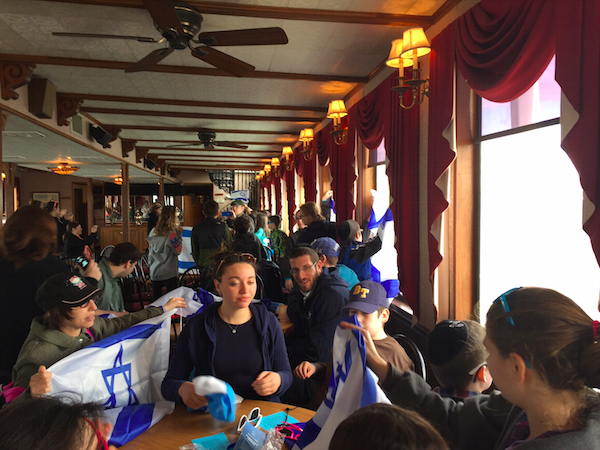 150 students and teachers participated in the re-enactment of the Boat, Exodus. They boarded buses that took them to the Baltimore Harbor. On the bus they were greeted by a Mossad agent from Palestine who told them about the risk and ultimate realization of their dream, once they got to the Promised Land. When they arrived at the harbor, the students pretended to be tourists going on a vacation to Istanbul, so they would not be ‘‘detected’ by the British, once on the boat, they were all given travel documents. The travel document were ‘stamped’, and some supplies for the long trip including a bottle of water and crackers as the survivors did not have lots of food on the boat. They all whispered Birkat Haderekh and waited to be on their way to then burst in cheers, take out the Israeli flags, sang Hatikva and then set out to prepare themselves for Palestine.

The students heard the real story of the Exodus. Their connection is that the boat was made for a Baltimorean company and was called President Warfield prior to being bought and refurbished to take refugees to Palestine. They taught self-defense, the Shinshinim taught them Hebrew slang and gave them a coded message to decode, they played Bingo, and braved the gusty winds. Unfortunately they were ‘caught’ by the British. The captain came on the loud speaker and announced the British rammed the boat. IAC Beyachad co-sponsored the event that let by our volunteer leader in Baltimore