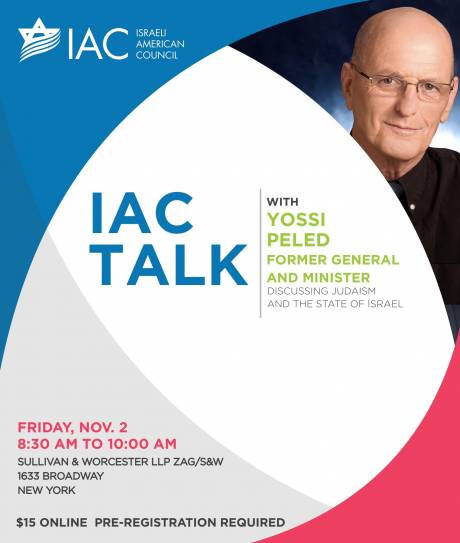 The IAC NY welcomes you to an intimate morning discussion with former general and minister Yossi Peled on topics surrounding Judaism and the State of Israel.

Peled was born in 1941 in Antwerp, Belgium. During the Second World War he and his sisters were handed over to an adoptive Christian family who raised them as Christians, despite the Peled’s being Jews. At the end of the war, their mother returned to take them, but because of her physical condition, she was forced to leave them in the care of a Jewish orphanage. In 1949, with the help of the Jewish Brigade, the Peled children immigrated to Palestine alone.

In 1959, Peled enlisted in the IDF as a combat soldier and quickly advanced in the chain of command to the senior post over the Northern Command, whose military achievements include the setting up of the “Hannibal” procedure as commander of the Northern Command and the initiation of a "law and order" operation against Hezbollah. Peled retired from the IDF in 1991 and turned to the civilian sector. Among his many roles he served as chairman of Tadiran Consumer Products, chairman of the Petrochemical Industries and as a consultant to the governments of India and Turkey on counter-terrorism. He also held titles in the field of media and communication.

In 1996, he began his political career by joining the ranks of the Likud. Peled served as minister in the 32nd Government of Israel, where he concentrated the field of activity on Holocaust survivors and SLA members.

In 2012, he retired from political life and since then served as Chairman of Eilat-Ashkelon Pipeline Company, Chairman of the Friends of Zion and Chairman of Dorad Energy.