IAC Dor Chadash Talk: From Anzeria to Boston: A Story of Determination and the Israeli Spirit 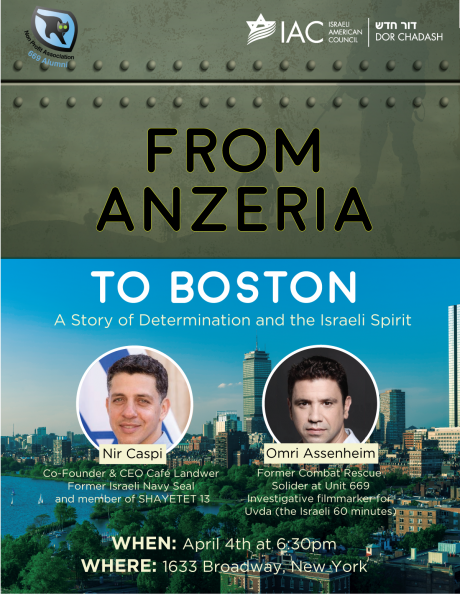 IAC Dor Chadsah in collaboration with AFU669-(American Friends of Unit 669) invites you to join us for a special evening of hopes, dreams, determination and the Israeli spirit.

On September 1997 a force of the elite unit SHAYETET 13 was sent to a secret operation behind the enemy line near the town Anzeria, south Lebanon. During the operation, a group of Hezbollah fighters detected the force and began shooting and detonating IEDs. 11 navy seal soldiers were killed that night, as well as the rescue team's doctor. 4 soldiers were injured, Nir Caspi was the most critical one, and is one of the only 5 survivors of that horrid night.

Nir Caspi- Co-Founder & CEO of Cafe Landwer, and IAC Boston Council Member. Caspi will disclose the hardships he experienced during his time in Shayetet 13, and discuss the striking success of his restaurant chain which has expanded to American shores.

Moderated by Omri Assehnaim - Former combat rescue soldier at 669 unit and alumni association member. A correspondent and investigative filmmaker for UVDA ("עובדה") a weekly investigative and documentary program on Israeli TV. During his first at UVDA he became the youngest recipient of the Sokolov Award.

**IAC Dor Chadash events are intended for Young Professionals ages 20's and 30's. We reserve the right to refund your ticket if above the intended age range.**