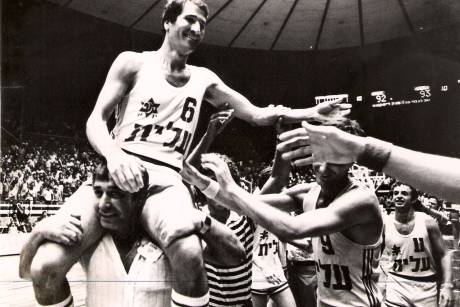 Tal Brody was an All-American basketball player at the University of Illinois graduating with a Bachelor’s and Masters Degree in Education. Tal first came to Israel with the USA team to the 1965 Maccabiah Olympic Games and in 1966 decided to take up a challenge and make Aliyah to Israel and became one the most honored new immigrants in Israel’s history receiving at age 34, the highest civilian honor, the Israel Prize.

He was selected to light the torch on Independence Day,  he ran with the torch, opening up the 9th Maccabiah Games, Captained Maccabi Tel-Aviv, winning Israel’s first European Basketball Championship, was selected to the Jewish Sports Hall of Fame, was chosen as one of the Top Ten immigrants that influenced Israel by the NY Times, and two years ago  in a ceremony held in the Israeli Parliament, was awarded the Lifetime Achievement Award.  Tal also received last February, the annual WIZO’s “Guardian of Israel” Award and last May received an Honorary Doctorate Degree from Bar Ilan University.

Since 2010, Tal officially serves as Israel’s Ambassador of Goodwill speaking throughout the USA & Canada and in September 2018, Tal was awarded by the People’s Republic of China, Shandong Province, their “Ambassador of Friendship ” Award for contributing to the economic development & friendly relations between China & Israel.