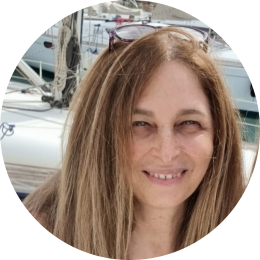 VP of Next Generation

Shira Ravin is currently serving as the IAC VP Next Generation, with the goal of taking programs to the next level, focusing on community building and developing an echo system in which all program participants cooperate and integrate.

With over 15 years of experience in educational leadership positions.

Shira has dedicated her career to advancing the field of teaching Hebrew as a second language and working to develop Jewish identity in the Diaspora.

Shira previously worked with the Steinhardt Foundation and in partnership with the Areivim Philanthropic Group to design and implement programs, strategies, professional seminars and workshops as well as formed partnerships with stakeholders, to professionally develop and expand programs such as academic mentorship certificate, National Hebrew language program at Camp (Kayitz Kef) in Canada and the United States and other initiatives such as developing a national professional informal model for teaching Hebrew as a second language, informal education, and pedagogy approaches, in which participants can learn and collaborate.

Over the years she has held leadership positions such as Vice Principal at Polanski High School, Jerusalem, Israel. She also served as the founder leadership team of the first Hebrew public charter school in D.C.

Shira believes in community building and the value of giving back to the community via volunteering. She participated as a lay leader in a variety of initiatives and organizations over the years, including the National Committee of the National Association of Hebrew Teachers (NAHET). Co-Chairperson and board member of the IAC-DC, as well as chairperson of the Friends of Israel Scouts DC branch. She also founded the professional Middlebury Hebrew Teacher Academic Network, which she currently participates on as a committee member (MHTAN)

Shira holds an MA in Teaching Hebrew as a Second Language from Middlebury College and currently is pursuing her doctorate in modern languages. She lives in Rockville, Maryland with her family.