Understanding Strategic Philanthropy in the Jewish and Israeli Communities 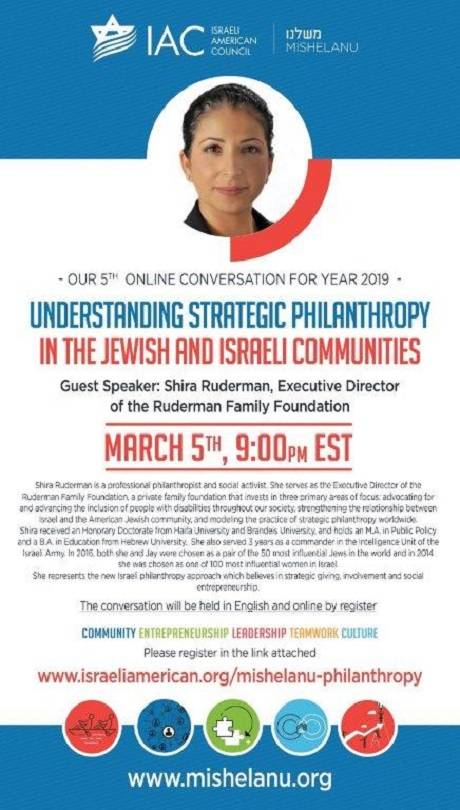 Guest Speaker: Shira Ruderman, Executive Director of the Ruderman Family Foundation
Shira Ruderman is a professional philanthropist and social activist. She serves as the Executive Director of the Ruderman Family Foundation, a private family foundation that invests in three primary areas of focus: advocating for and advancing the inclusion of people with disabilities throughout our society, strengthening the relationship betweenIsrael and the American Jewish community, and modeling the practice of strategic philanthropy worldwide.
Shira received an Honorary Doctorate from Haifa University and Brandeis University, and holds an M.A. in Public Policy and a B.A. in Education from Hebrew University. She also served 3 years as a commander in the Intelligence Unit of the Israeli Army. In 2016, both she and Jay were chosen as a pair of the 50 most influential Jews in the world and in 2014 she was chosen as one of 100 most influential women in Israel. She represents the new Israeli philanthropy approach which believes in strategic giving, involvement and social entrepreneurship.

*The conversation will be held in English and will begin at 9:00pm EST