"Call Me Bullie" - A Documentary on AB Yehoshua 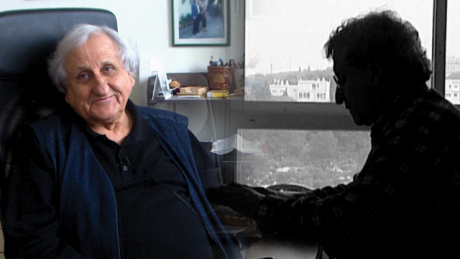 Through interviews with the AB Yehoshua and archival materials, "Call Me Bullie" explores the life of one of Israel's most famed writers. During the screening, the filmmaker will also share personal insights from working with Yehoshua and reflect on his project documenting Israel's leading poets and authors.

Abraham "Bullie" Yehoshua, one of Israel's foremost contemporary authors, is known for his gift of capturing the mood of contemporary Israel through his novels and plays. Omri Lior's film Call Me Bullie follows the life of the writer and playwright whose works have earned him several prestigious awards, including the Bialik Prize and the Israel Prize for Literature.

The film begins with Yehoshua's birth in 1936 to a fifth-generation Jerusalem family and tracks his journey as a writer through interviews and archival materials. In the conversations with the passionate and gregarious storyteller, Yehoshua explains how he acquired the "B" (for "Bullie") that made him AB Yehoshua and shares personal stories about his Sephardic heritage, his life in Jerusalem and Haifa, and his relationship with his parents. He also offers glimpses into his creative process and research and reflects on his early and most recent writings.

Omri Lior, is an Israeli documentary filmmaker, born in Haifa in 1952. Lior studied Telecommunications and Film at San Diego State University in California. After graduation, he returned to Israel and for the next 25 years worked as a producer/director, making a range of films and TV programs.

In 2001, Lior began studying Hebrew literature at Ben Gurion University of the Negev. During these studies, his project "Words with a View" first took shape. This documentary series - which includes the film Call Me Bullie - tells the stories of some of Israel's leading authors and poets through interviews and archival materials.