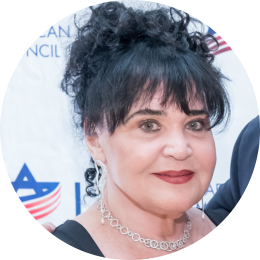 Dr. Nili Sachs has been a therapist, speaker and author for the past 4 decades. Graduate of Wingate Institute for Physical Education, Nili served in the IDF as a fitness coach. She has a BA degree in Philosophy of Judaism from the University of Judaism in LA. MA degree in Marriage, Family and Child Psychotherapy Ph.D. in Clinical Psychology. Her expertise is in human behaviors with a focus on relationships and body-image; subjects she frequently speaks and publishes on. In fact, Nili was the recipient of “Raving Fans Award” by PAIRS International. Authored 2 books: First Book: Yerida Medaat,  ירידה מדעת. In Hebrew, about the mental health of Israelis who live outside of Israel. published by Modan Publishing House, Tel Aviv. Her latest book, Booby-Trapped, How to Feel Normal in a Breast-Obsessed World is an anthropological/psychological observation on the treatment of the human body around the world. Her message attracted national media attention on such shows as the TV FOX News The O’Reilly Factor, WCCO TV and 196 radio interviews.

Dr. Nili has also deep interest in anthropology and participated in expeditions to destinations such as the rain-forests of South America: She lived among the Jivaro Indian tribe and observed their lives and adjustments to new Western concepts, such as wearing cloths, religion and hygiene. In the rain forest of Borneo, Indonesia Nili volunteered to rescue orphans Orangutans and bring them out of depression. Dr. Nili lives in MN, CA and NV with her husband Ben. She is a mother of; Edan and Guy and is Danny’s grandma.