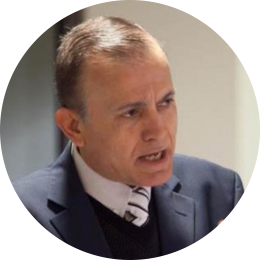 World expert in medical preparedness for complex emergencies and disasters

Professor Ashkenazi is an international expert on disaster management and leadership, community resilience and mass casualty events with both extensive professional and academic experience. He is considered one of the world’s foremost experts in medical preparedness for complex emergencies and disasters.
Ashkenazi is the former Director of the Urban Terrorism Preparedness Project at the NPLI Harvard University. He is also an Adjunct Professor in the Department of Epidemiology at Emory University; an Adjunct Professor of disaster management at the UGA; a Professor of Disaster Medicine at Ben-Gurion University in Israel; Founder of NIRED Center at the College of Law & Business; Commander at Mobile Med One Foundation; Advisory Board of Israel Homeland Security; and a consultant to Harvard University, Centers for Disease Control and Prevention, the U.S. Department of Health and Human Services, the U.S. Department of Homeland Security, FEMA, the White House, the World Bank, Rio Olympic Games, the Brazilian Ministry of Defense, India NDMA, SAMUR – Protección Civil, China Ministry of Health and other national and international agencies. Ashkenazi served as the Surgeon General for the
IDF Home Front Command.

In 1993, Isaac decided to volunteer again to the IDF, this time as the Head of Medical Services in the West Bank. After one year of services, he was promoted to Head of the Public Health Department in the Medical corps. While continuing to serve in the IDF, he was graduated from Galilee College and received a Diploma in Medical Administration in 1996.

In 1997, he was promoted to full Colonel with the responsibilities of Surgeon General for the Home Front Command (HFC) and the National Medical Coordinator for Mass Casualty Incidents and Disasters. As the Surgeon General of the HFC he led medical mission teams to give assistance to the USA Embassy survivors in Nairobi, after the terrorist attack (August 1998), to the survivors of the earthquake in Turkey (August and November 1999) and in Greece (September 1999).

In 2000, Isaac went on a sabbatical to Boston, MA in USA, where he received a MPA (Master of Public Administration) from the John F. Kennedy School of Government at Harvard University. Subsequently he received a Master’s degree (summa cum laude) in National Security from Haifa University.
Over the past thirty years, Ashkenazi has become increasingly interested in disaster management and has served in humanitarian missions in Asia, Africa, South America and Europe. He has given courses in Disaster Medicine; Disaster Management; Crisis Leadership; Urban Terrorism; Preparedness and Response for Mass Casualty Events; Individual and Community Resilience. He has published more than two hundred papers in medical and scientific journals, and presented his work in the United States, South America, Africa, Europe Asia and Middle-East countries. In the last twenty years, Ashkenazi has received Presidential Medals of Honor for Humanitarian Assistance from Turkey and Greece; the President of Rwanda; the Jewish Community in France, Turkey, Italy and USA; the UJC; and the Brazilian Ministry of Defense.