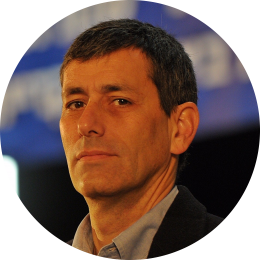 Yoav Limor is the senior defense correspondent for “Israel Hayom” daily newspaper, and host of the morning show and documentaries on Keshet TV.

Limor is a veteran military correspondent, who has been covering the Middle East conflict for the last 33 years, he presents daily news and commentary.

He began his career at the Israeli Defense Force's Magazine, and later at “Maariv” daily, as a political correspondent and as the newspaper's senior correspondent in Europe, based in London. Limor joined channel 1 TV in 2003, where aside from his reporter and commentator position covering defense issues, he hosted a political talk-show.

In his different capacities, Limor has covered all major events in the region, such as the on-going conflict with the Palestinians, the 2000 withdrawal from Lebanon, terror attacks in Israel and overseas, the 2005 disengagement from Gaza, the assassination of Prime Minister Yitzhak Rabin, the 2006 Lebanon war (on which he co-wrote the best-seller “Captives of  Lebanon”), the 2009, 2012, and 2014 operations in Gaza and the on-going battle to stop Iran's nuclear project.

Limor covered major events in the world, such as wars and terror attacks in Europe, Africa and Asia (including the attack on Mumbai in 2008).

He appears regularly on different media outlets in Israel and around the world. He also has a recently published new book, "Snapshot" (with photographer Ziv Koren).