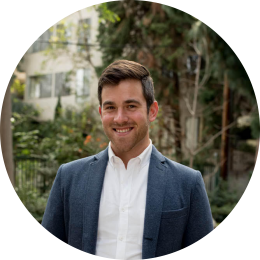 Tyler (Tye) Gregory envisions a progressive movement in the U.S. that sees no contradiction between a love for Israel and a commitment to social justice and equality. Tye serves as the Executive Director of A Wider Bridge, the LGBTQ organization advancing equality in Israel, and equality for Israel.

In his capacity at AWB, Tye partners with his talented team and dedicated board to advance the LGBTQ Israel movement. Previously, Tye served for three years as the Deputy Director of A Wider Bridge, managing the fundraising and programming portfolios of the organization. Before AWB, Tye spent several years working in the political department of AIPAC (the American Israel Public Affairs Committee), America’s pro-Israel lobby. He is an alumnus of the Schusterman Fellowship, and is in the third cohort of Leading Edge's CEO Onboarding Program. Tye is a native of San Diego, California, and a graduate of the University of California, Davis.