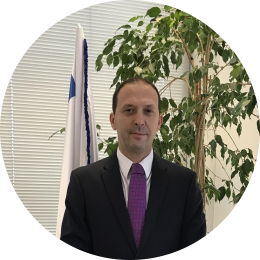 Shlomi Kofman began his appointment as Israel’s Consul General to the Pacific Northwest in August 2017. He most recently served as a Policy Advisor to the Deputy Foreign Ministers based in Jerusalem, Israel.

Over the course of his 20-year diplomatic career, Kofman has served as Israel’s Deputy Consul General in New York City, Chief of Staff to Ambassadors in Washington D.C., Deputy Ambassador in Thailand and Deputy Consul General in Shanghai. His past domestic Foreign Ministry positions include Director of North American Economic Affairs, Policy Advisor to the Deputy Foreign Minister, Diplomatic Advisor & Director of the International Department in the Parliament and Ministry of National Infrastructure, and the Head of the Northeast Asia sector. Prior to joining the Foreign Ministry, Kofman worked in the High-Tech Industry representing the Israeli company Orbot in South Korea, as well as a consultant to a leading Israeli company, ECI.

Kofman holds a Bachelor of Arts in International Relations & East Asian studies from Hebrew University in Jerusalem and a Master’s from Webster University – Shanghai University of Finance & Economics. He also holds an Associate’s engineering degree.

Shlomi was born in Tbilisi, the capital of the Soviet Republic of Georgia and made Aliya (immigrated) to Israel at the age of nine, after being refused for three years by Russian authorities. He has been married for 20 years to Sharon and they have two children, Emma and Jonathan.