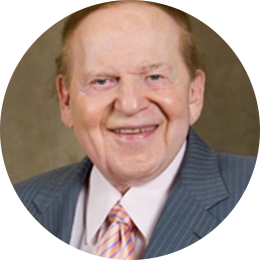 Sheldon Gary Adelson (born August 4, 1933) grew up in the Dorchester neighborhood of Boston, Massachusetts, the son of Sarah and Arthur Adelson. His family was of Ukrainian Jewish ancestry. His father drove a taxi, and his mother ran a knitting shop. He started his business career at the age of 12 when he borrowed two hundred dollars from his uncle and purchased a license to sell newspapers in Boston. At the age of 16, he had started a candy-vending-machine business. He attended trade school to become a court reporter and subsequently joined the army. Adelson attended City College of New York but soon decided to drop out.

After being discharged from the army, he established a business selling toiletry kits, then started another business named De-Ice-It, which sold a chemical spray to help clear frozen windshields. In the 1960s, he started a charter tours business. He had soon become a millionaire, although by his 30s he had built and lost a fortune twice. Over the course of his business career, Adelson has created over 50 of his own businesses. Adelson is the chairman and chief executive officer of the Las Vegas Sands Corporation, which owns the Marina Bay Sands in Singapore and is the parent company of Venetian Macao Limited which operates The Venetian Resort Hotel Casino and the Sands Expo and Convention Center. He also owns the Israeli daily newspaper Israel HaYom. Adelson, a lifelong donor, and philanthropist to a variety of causes, founded with his wife’s initiative the Adelson Foundation. As of June 2015, Adelson was listed by Forbes as having a fortune of $28 billion, and as the 18th richest person in the world.