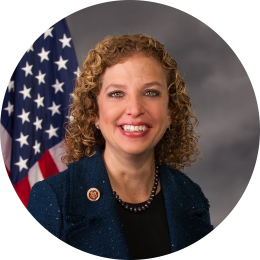 Debbie Wasserman Schultz has dedicated her public life to serving South Floridians and standing up for justice, equality, and opportunity wherever and whenever it is threatened. As Florida’s first Jewish Congresswoman, she has earned the respect of her colleagues for working tirelessly on behalf of seniors, children, and families for nearly three decades.

Only two months after her arrival in Congress, Wasserman Schultz became a leading national voice in opposition to President George W. Bush’s involvement in the Terry Schiavo case. Facing a House of Representatives controlled by Republicans, she stood up for civil rights and defended the idea that “Congress is not the appropriate venue to decide end-of-life or any private, personal family dispute.”

Known for vigorously defending her progressive values, Congresswoman Wasserman Schultz has also demonstrated her ability to pass meaningful legislation in a bipartisan fashion. She teamed up with former Republican Senator Arlen Specter to write a resolution – passed unanimously by both houses of Congress and signed by President Bush – to declare May as Jewish American Heritage Month in an effort to reduce anti-Semitism, hate, and bigotry.

As a mother of three, Congresswoman Wasserman Schultz has worked to prioritize the safety and security of our nation’s youth. She authored the first federal pool and spa safety legislation – the Virginia Graeme Baker Pool and Spa Safety Act. Since its passage in 2007, there have been no drain entrapment deaths in any public pools in the United States. That same year, she sponsored the PROTECT Our Children Act, which created the largest law enforcement effort ever formed for the protection of our nation’s youth.

After announcing her own battle with breast cancer in 2009, Wasserman Schultz introduced the EARLY Act, a piece of legislation designed to increase breast cancer education and awareness. The EARLY Act became law as part of the Affordable Care Act, signed by President Barack Obama in 2010. Wasserman Schultz also worked with Republican Congresswoman Renee Elmers to write and pass the PALS Act, which helps increase young women’s access to mammograms.

A leading advocate for women and girls, Congresswoman Wasserman Schultz introduced the Rape Survivor Child Custody Act to encourage more states to allow women to terminate the parental rights of a rapist, based on clear and convincing evidence. The bill was signed into law by President Obama in 2015.

Currently, Wasserman Schultz is one of only two Democrats in the House of Representatives who serve on both the Budget Committee and Appropriations Committee. As the Ranking Member of the Military Construction and Veterans Affairs Subcommittee, she is committed to ensuring our nation’s veterans have the resources and support they need. As a Member of the Energy and Water Committee, Congresswoman Wasserman Schultz is a leading advocate of the efforts to protect the Florida Everglades, take bold action on climate change, and safeguard our air and water.

As Chief Deputy Whip of the Democratic Caucus, Congresswoman Wasserman Schultz has the unique ability to work with and help lead her colleagues in support of a progressive policy agenda. She has been a tireless defender of Social Security and Medicare and is strongly committed to expanding access to quality and affordable health care, preventing senseless tragedies of gun violence, and defending the fundamental idea that all Americans have the right to be treated equally under the law.

Congresswoman Wasserman Schultz attended the University of Florida where she served as president of the Student Senate and graduated with a Bachelor’s Degree in Political Science in 1988 and a Master’s Degree in 1990. She has been married to Steve Schultz for more than 20 years and together they have three children.

Wasserman Schultz has said that representing the people of Florida’s 23rd district is the greatest privilege of her professional life. A proud South Floridian who represents parts of Broward and Miami-Dade counties, Congresswoman Wasserman Schultz resides with her family in Weston.