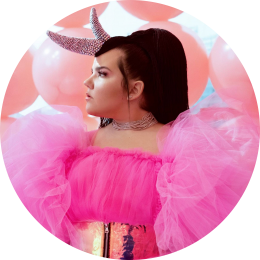 Netta Barzilai was born on January 22, 1993, in Hod HaSharon, Israel. When she was only three months old, her family moved to Nigeria, where her father was working, but they returned to Israel four years later. While in Nigeria, she learned the rhythms of African lullabies which her local nanny used to sing to her.

A sensitive child with the soul of an artist, Netta Barzilai was the target of bullying at school for being overweight. She was not a popular child and would often be humiliated, which later resulted in her having low self-esteem. Considering herself unfit to be a singing icon, she wanted to study psychology or education and become a kindergarten teacher instead. She also served as a counselor in Hanoar Haoved Vehalomed for years.

She auditioned for season five of 'HaKokhav HaBa', the gateway to Eurovision Song Contest, in September 2017. Her rendition of 'Rude Boy' by Rihanna received 82% of the votes, advancing her to the first stage of the competition. She finally won the competition by performing a mashup of 'Gangnam Style' by Psy and 'Tik Tok' by Kesha in the second round, earning 104 points from the judges and 106 points from the viewers to achieve the No.1 spot.

At Eurovision, she performed 'Toy' and earned a total of 529 points from two rounds to win the competition on May 12, 2018.

Since then Netta tours worldwide with her new songs Nana Banana and Bassa Sababa that had made it to the top of the charts in many countries.