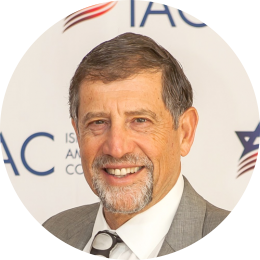 Naty Saidoff is the founder and principal owner of Capital Foresight, a closely-held debt acquisition and commercial real estate holding company. It also has infrastructure investments and is an owner of a controlling interest of a publicly traded Israeli company which has an international footprint.

Naty and his wife, Debbie, are the main supporters of Stand With Us. They are members of its Founding Circle, serve on its Executive Board of Trustees, and were both honored by the organization in 2003 & 2017.

Naty is a co-founder and member of the Executive Board of the Israeli American Council (IAC). He and his wife received the 2010 IAC Honorary Award.

Naty is the founder, principal underwriter and chair of Celebrate Israel Festival, the largest Jewish festival in the US. The festival, which started in Los Angeles and is under the IAC umbrella, now takes place in many different cities across the US.

Naty is the first Israeli born member of the American Jewish Committee where he serves on its National Board of Governors. Both he and his wife finance 4 groups of VIP trips every year through Project Interchange (an institute of AJC) for which organization Debbie serves as national president. They were both honored with AJC’s Community Service Award in 2006.

Debbie and Naty are also on the board of the Shalom Hartman Institute.

Naty is a member of the Maccabi Committee of Eighteen and he represented the United States as part of the road biking team in the 2009 Maccabi Games, where he medaled.

Naty is a graduate of the University of California, Los Angeles (UCLA) where he received a B. S. in Economics and was a Phi Beta Kappa candidate.