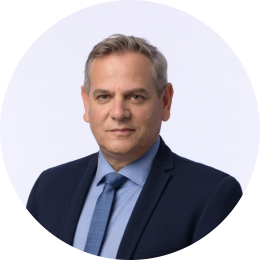 MK Nitzan Horowitz is the Chairperson of Meretz party and the Head of the newly formed Democratic Union.

In 2014, he was granted with the Outstanding Parliamentarian Award by the Israeli Institute for Democracy.

In 2013, he ran for mayor of Tel Aviv-Jaffa. He is the first openly gay party leader in Israel.

Before joining politics, he had a long career in journalism. He was the chief U.S correspondent for the Israeli TV News Company, chief European correspondent for Ha’aretz newspaper, Head of the International desk at Israeli Channel 10 TV, commentator and columnist for many Israeli radio and TV shows. He was also active on environmental issues, and received the "Pratt Prize" for Environmental Journalism.

Horowitz founded the “Israel Hofsheet” (Be Free Israel) NGO to promote pluralism and against religious coercion.

Born in Rishon-Le Zion, Israel, he graduated the law faculty in Tel-Aviv University, and is member of the israeli BAR since 1992.