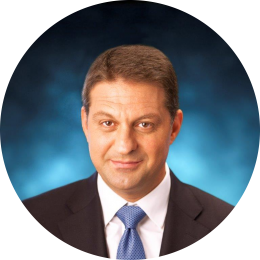 Haim Bibas is currently serving his third term as mayor of Modi'in Maccabim Reut, after having served in several local government management positions.  Bibas has won widespread praise for the many accomplishments under his tenure. He has advanced the school system, allocating 50% of the municipal budget to education, and the city has won the National Education Prize. In the last decade the city grew from 69,300 to almost 100,000 residents, and this is accompanied by large scale building and development.

In recognition of his experience and accomplishments, Bibas was elected in 2014 by the majority of mayors in Israel to serve as the Chairman of the Federation of Local Authorities, the umbrella organization for 257 local authorities across the country. In 2018, he was re-elected as Chairman of the Federation of Local Authorites.

The Federation addresses the issues faced by local authorities and provides them with professional and efficient services. As Chairman, Bibas represents the interests and concerns of the local authorities to the Israeli government at the executive, legislative and judicial levels.

Prior to assuming his role as Chairman, Bibas was the Director of International Projects and Development with the Federation of Local Authorities.  Here he was responsible for successful joint ventures between government ministries, local authorities and the private sector.  Here, he has also served as municipal economic advisor and project manager, with responsibility for environmental protection and transportation, with Local Government Economic Services Ltd.

He initiated a variety of reforms - in education, in housing, in programs promoting the Arab sector, reform in the water corporations and more. Among the key initiatives he led were increasing development grants for the support of weaker authorities, adding a second assistant in kindergartens, promoting wage agreements to improve terms of employment for employees of all local authorities.

At the national level, in 2007, 2012, 2013 and 2015, Bibas served as the head of Benjamin Netanyahu's election campaign within the Likud primaries, for election to Prime Minister.

Bibas holds a BA from the Department of Political Science, University of Haifa and an MA in Public Administration and Local Government from Bar-Ilan University. His thesis examined the subject of local government reform and professional city management. Bibas is a Lieutenant Colonel in the IDF reserves. Bibas has lived in Modi'in since 1997, with his wife and three children.