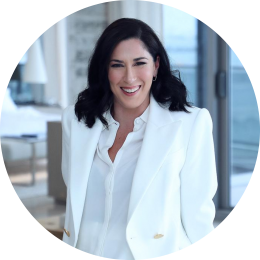 Leah Soibel, a Hispanic American and Israeli, has more than a decade of experience on the ground in Israel, the U.S, and Latin America working with hundreds of global Latino journalists and influencers. In 2012, she founded Fuente Latina (FL), the only organization of its kind that ensures global Spanish language media have the facts they need – before and when the news breaks – to accurately cover Israel, regardless of their geographic location. Leah, who appears regularly as Spanish language analyst about Israel and Iran, launched Fuente Latina in response to a growing demand from Latino journalists for greater access to information about Israel and the Middle East.

Fuente Latina is a US 501c3 non-profit and non-partisan organization headquartered in Miami, with offices in Jerusalem, Madrid and Los Angeles. FL specializes in educating progressive Latino media and influencers about Israel. Over the last seven years of operations, FL brought 300 Latino journalists and influencers to Israel, facilitated 35,000 accurate TV, radio and print stories, reaching millions of Latinos worldwide, and their work has resulted in 2 TV Emmys wins. Israel does not have an international Spanish language TV network like Iran (HispanTV), so Fuente Latina has filled the void by communicating Israel’s message to millions of Latinos worldwide via the mainstream Hispanic media.

Leah established FL after seven years at The Israel Project; her last two years there she was TIP’s Spanish Media Director. Leah is a National Security Education Program Fellow and received an Arabic language certificate from the American University of Cairo’s Arabic Language Institute. She has a BA in Middle East History from Dickinson College, an MA in Security Policy Studies from George Washington University, and has completed coursework for a doctorate at the Hebrew University of Jerusalem. Leah speaks English, Spanish, Hebrew and Arabic.