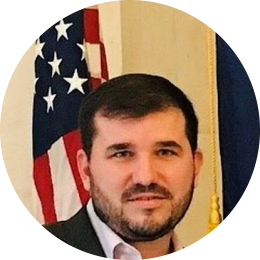 As an attorney and policy specialist, Joe has been a sought consultant for numerous lawmakers at the state and federal levels over the past decade.

In just the last 6 years, he has led drafting and successful advocacy of legislation and key policy resolutions supporting Israel and combatting anti-Semitism in over two-thirds the states in America.

In 2015, Joe wrote and led the advocacy of the country's first anti-BDS law regulating against commercial boycotts of Israel in South Carolina.

Since then, similar laws have passed in an additional 27 states. In Spring 2018, Joe led the way toward South Carolina's adoption of a first-ever state codification of a uniform definition of anti-Semitism. The prior passage of a similar bill in Bal Harbour, FL was also an initiative he helped develop. He has been extensively published in national media outlets and the international press. He is an honors graduate of the University of Miami.