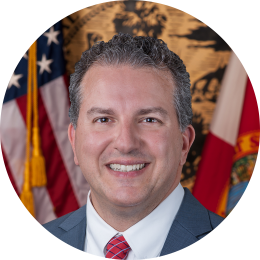 Chief Financial Officer of the state of Florida

Jimmy Patronis is a native Floridian born and raised in Panama City. He earned his associate degree in restaurant management from Gulf Coast Community College and a bachelor’s degree in political science from Florida State University. His public service career began with experience as an intern in the Florida Senate and the United Kingdom’s House of Commons. Following Patronis' college graduation, Governor Lawton Chiles appointed him to the Florida Elections Commission, and he was later reappointed by Governor Jeb Bush. He served in the Florida House of Representatives from 2006 to 2014, representing his hometown region in the Florida Panhandle. Patronis was also appointed to serve on Florida’s Public Service Commission, as well as the Constitution Revision Commission, which meets once every twenty years to propose changes to the state constitution.

CFO Patronis shares a personal bond with the State of Israel and is a strong supporter of Florida’s unique relationship with America’s greatest ally in the Middle East. As a member of the Florida Cabinet, he voted with the Governor and Attorney General to apply Florida’s anti-BDS statute to Airbnb for its discriminatory policy towards Jews living in Judea and Samaria. The Florida Cabinet’s decision to enforce their anti-BDS law against Airbnb is credited by many as the catalyst for Airbnb reversing its discriminatory policy. Patronis also sponsored and passed a Cabinet resolution recognizing Jerusalem as Israel’s “eternal and undivided capital.”

As Florida’s CFO, he is responsible for overseeing Treasury investments and for two years has directed investment increases in Israel bonds. In May of 2019, CFO Patronis visited Israel for the first time as part of Florida’s trade mission to the nation. During the trade mission, Patronis toured Yad Vashem, Israel’s official memorial to the victims of the Holocaust, which strengthened his resolve to support Israel and fight anti-Semitism. He was also fortunate enough to visit a Jewish community in Gush Etzion and hear firsthand how the BDS movement is not only harmful to Israel, but also hurts ordinary Palestinians. Patronis also prayed at the Western Wall. His experience visiting Jerusalem and meeting with Prime Minister Netanyahu was an eye-opening experience and was a clear demonstration of how Israel protects the religious freedom of all residents of all faiths.

CFO Patronis met with Holocaust Restitution experts to improve Florida’s Holocaust Victims Assistance Program housed within his office. This program was established to ensure that the potential and actual insurance claims, actual financial claims, and the assets and property of Holocaust victims and their heirs and beneficiaries be expeditiously identified and properly paid, compensated, or returned. CFO Patronis is a partner in a family-owned seafood restaurant called Captain Anderson’s that celebrated its 50th anniversary in 2017. He and wife Katie are proud parents to two sons, Jimmy Theo III and John Michael.