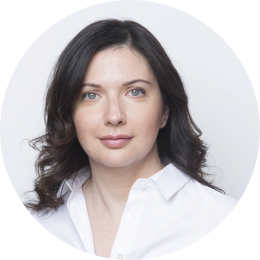 Chair of the Board of Directors, The Museum of the Jewish People Beit Hatfutsot & President, NADAV Foundation

After she completed her B.A and M.A in Economics, Irina worked in the Moscow and London offices of a leading international communications agency. In 2005 and 2006, she worked as an independent communications consultant for commercial entities and non-profit organizations in London. In 2006, at the age of 28, Irina made Aliyah.

That same year, she founded and managed the Israel Center for Better Childhood (ICBC) – a non-profit organization founded by the Nevzlin and Mionis families. The ICBC is dedicated to improving the welfare of children and youth in Israel in need of medical attention and educational support.

Another important institution that Irina leads is the Nadav Foundation, founded in 2003 by her father, Leonid Nevzlin. It promotes projects that build a sense of Jewish peoplehood. Such endeavors aim to strengthen collective Jewish identity by encouraging the establishment of productive and ongoing relationships between Jews throughout the world. Irina served as the CEO of the Nadav Foundation from 2008 to 2012, and became its president after being appointed active Chair of the board of directors at the Museum of the Jewish People.

Irina conducted a comprehensive transformation of the then-Diaspora Museum, which morphed into today’s Museum of the Jewish People. Together with her team, she raised approximately $100 million for the construction of a brand new museum. Irina's bold leadership during this re-branding phase helped the museum establish a novel paradigm of what it means to be Jewish. She has encouraged the museum to place greater emphasis on developing a sense of belonging among the Jewish people, forging a stronger Jewish identity, strengthening diverse ties connecting Jews throughout the world, and unifying Jews while recognizing and celebrating the different narratives that reflect Jewish diversity. These new points of emphasis help foster a positive outlook on the Jewish experience and how Jewish life has contributed to the well-being not only of Jews, but for many beyond the tribe. It is the biggest Jewish museum in the world and the only museum that tells the story of all Jews around the globe with equal focus on their past, present, and future.

In 2017, Irina was chosen by The Jerusalem Post newspaper as one of the 50 most influential Jews in the world (https://www.jpost.com/Poll/50Influencers2017/50Influencers2017.aspx?ResultGroup=2(.

Irina speaks fluent Russian, English, and Hebrew. She is married to Yuli-Yoel Edelstein, who has been Speaker of the Knesset since 2013. She is also the mother of two.