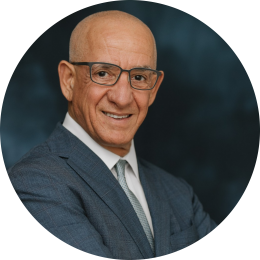 Born in 1960 in Jerusalem to immigrants from Tunisia, Haim Taib, one of seven children, was raised and educated in a rural village. As the son of a farmer his roots were planted deep in the soil, anchored in values of hard work.

From early on, Taib was driven by the spirit of entrepreneurship and innovation: vision, determination, daring, leadership – and the ability to be “in the right place at the right time”. In 1989 in Portugal he took his first steps in the world of international commerce, expanding his activities to Angola in 1991. Taking on the challenges of rebuilding in the wake of a decade-long civil war, he established cooperative agricultural villages, built tens of thousands of residential units and led the construction of critical infrastructures for education, healthcare, telecommunications, energy and water, among others.

As founder and president of Mitrelli Group, Haim Taib expanded his activities to additional African nations, the former Soviet Union and China, while maintaining his deep connection to Israel.

For Haim Taib, aspiring to excellence is a way of life – and a core business value. His vision has always focused on putting people at the center of his initiatives: he has always sought to reinforce and empower struggling populations. This is the spirit that infuses his broad philanthropic activity in Israel and abroad.

Together with Prof. Aryeh Shechner, President of “Save a Child’s Heart”, he established and serves as president of “Save a Child’s Heart – Africa” (LINK), bringing life-saving cardiac care to children in distressed regions. Together with Kalman Samuels (LINK) he established the International Friends of Shalva (LINK), serving special needs children and their families in Israel.
In cooperation with Prof. Shahar Lifshitz (LINK) and Supreme Court Justice Elyakim Rubinstein (LINK), Taib established the Israeli Congress for Judaism and Democracy (LINK) – a groundbreaking forum for dialogue on core issues confronting Israeli society.

His heartfelt commitment to people – and his desire to create a sustainable model for improving people’s lives -- is what led Haim Taib to establish the Menomadin Foundation for Impact Investments and Philanthropy.

Haim Taib is married to Iris, father to six children and a grandfather.