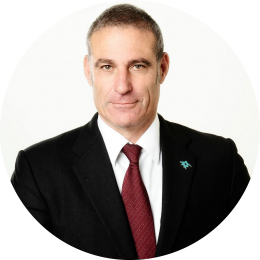 Mark began his career as a diplomat in 1983 for Israel's Ministry of Foreign Affairs. Over the next 15 years, he served the country in embassies and consulates in Istanbul, Bonn and New York. In 1998, he became the first employee of Birthright Israel and served as the COO of the project's planning stage. Mark took part in the analysis of Israel's capacities in terms of tourism absorption, the project's principles and its financial planning.

Upon launching, Mark became the International Director of Marketing and Community Relations. In this capacity, Mark was in charge of the creation of the Birthright Israel brand (“Taglit" in Hebrew) and the organization's international outreach, today encompassing 62 countries around the globe. In 2008, Mark was promoted to CEO of Taglit Birthright Israel, one of the most successful organizations in the Jewish world today.