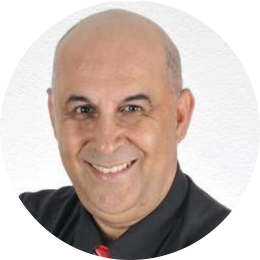 Ben-Onn was born in Jerusalem and served in the IDF as an officer and the assistant to the Commander of the Armoured Corps, reaching the rank of Lieutenant-Colonel. During the Yom Kippur War, Ben-Onn was a Tank Gunner in the Suez Canal region.

Ben-Onn has a degree from the Hebrew University in International Relations and History. He is also a graduate of the Israel Broadcasting Authority’s school of Journalism.

Ben-Onn has covered wars, elections and many facets of the Arab-Israeli conflict and Peace Process. He has served as the editor-in-chief of Kol Yisrael’s “Yoman Haboker” (Morning news magazine), Israel’s highest rated radio news magazine. He also hosts call-in programs and talk shows.

He is well known in Israel for his coverage of the Israeli Premier Soccer League and specifically for being the play by play announcer of the games of Beitar Jerusalem.

In 1997, Ben-Onn served as the spokesman of the Israel National Police, holding the rank of Brigadier General. From 1989 to 1991 Ben-Onn was the Spokesman for the Israeli Ministry of Energy and Infrastructure.

Since 1984, Ben-Onn lectures in Jewish communities across the world about subjects related to his work as a journalist and his military background.