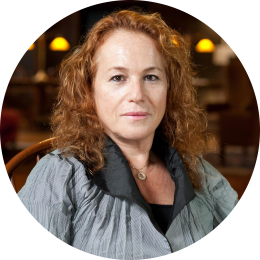 Director of the Middlebury School of Hebrew, and C.V. Starr Research Professor of Language and Linguistics at Middlebury College

Vardit Ringvald, Ph.D., is the founder and the first appointed Director of the Middlebury School of Hebrew in 2008. During her tenure at the school, she designed and implemented two intensive programs for modern Hebrew and an intensive program for classical Hebrew, in addition to two innovative degree programs; Master and Doctorate studies in teaching Hebrew as a second language. As a research professor she leads research on a variety of topics related to Hebrew teachers’ education as well as the learning of Hebrew in the global era.

Vardit served as the Director of the Hebrew language program at Brandeis University for over twenty years. During this time, she served as the director of Arabic, Asian and Romance languages programs. In 1996, she founded the Hebrew Language Summer Institute at Brandeis University and created the Master of Arts in Teaching Hebrew in 1998, and the Hebrew DeLet in 2010. Vardit was a team member for developing the Hebrew Proficiency guidelines for ACTFL, as well as Hebrew proficiency curriculum frameworks for secondary and postsecondary education for ACTFL and the United States Department of Education. In addition to serving as chair of the SAT II for Hebrew and as advisor for Hebrew to the National Middle Eastern Language Resource Center (NMELRC), based at Brigham Young University, she served on the committee for Hebrew language pedagogy for the National Association of Professors of Hebrew (NAPH). Prof Ringvald is one of the developers of the Oral Proficiency Interview for Hebrew and an OPI trainer, and the primary author of Brandeis Modern Hebrew. This volume, the first to be based on the proficiency method, is rapidly becoming the most-used modern Hebrew textbook in the United States.