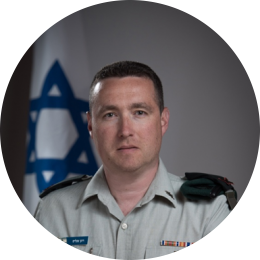 Ronen Manelis was born in January 1979 in Jerusalem, and grew up in Beit Shemesh. He enlisted in the IDF in 1997 and has served in various positions in the Field Intelligence (now Combat Intelligence) Corps and in the Intelligence Directorate of the General Staff.

From 2009 to 2010, Manelis served as the Branch Head in the Research Division of the Intelligence Directorate.

From 2010 to 2012 Manelis served as the Head of the Lebanon Branch of the Northern Command.

When LTG (res.) Gadi Eisenkot served as the Head of the Operations Directorate and as the Commander of the Northern Command, Manelis served as his Military Assistant, and subsequently as LTG (res.) Eisenkot’s assistant when he was appointed Chief of the General Staff from 2015 to 2017.

In February 2017, Chief of the General Staff LTG (res.) Eisenkot appointed BG Manelis to the position of IDF Spokesperson.

On May 18, 2017 BG Manelis entered the position and was awarded his current rank of Brigadier General.

On September 15, 2019 BG Manelis completed his tenure as the IDF Spokesperson.

Manelis earned a B.A. in History from the Hebrew University in Jerusalem, and received his M.A. in Political Science from Tel Aviv University.

He is married with two children and lives in Mazkeret Batya.