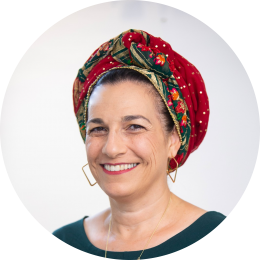 Bat Galim Shaer is an educator and public figure, married to Ofir and mother to 5 daughters and one son - the late Gil-ad z’’l - who was murdered by Hamas terrorists in Gush Etzion in the summer of 2014 along with his friends Naftali Frenkel and Eyal Yifrach.  With over 20 years of experience in various educational frameworks, Bat Galim has presented lectures and initiated conferences to promote and foster unity within Israeli society. She is one of the creators of Israel’s "Unity Day" project which has grown to include the participation of tens of thousands of high school students, soldiers, organizations and communities in Israel and throughout the world.

Founder of the "Sonshine" organization whose goal is to increase connections in Israeli society and throughout the Jewish world as well as bolster optimism among the Jewish people, Bat Galim has spent the past 5 years traveling the world, lecturing and participating in activities to promote unity and connections on behalf of world Jewry.

She is author of the bestselling book, "Expecting My Child -  Longings of a Mother,” which shares personal coping methods from her experience and describes the strength of Israeli society and the Jewish people throughout the world in times of crisis.

Bat Galim holds a BA in Political Science and Jewish History and an MA in Educational Administration.