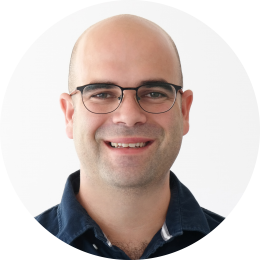 Born and raised in Israel, Yarden is an alumnus of the agricultural school “Mikve Yisrael” and serves in the IDF reserves as a Major in an elite intelligence unit. At IDC, he earned a bachelor’s degree in law and political science, and received his Master’s degree in public policy with honours.

Yarden previously served two years as the Chairman of the IDC Student Union, and was elected to the management board of the National Union of Israeli Students. Afterwards he was nominated by the President of Israel to the Council of Higher Education, where he volunteered for two and a half years.

During his studies, Yarden initiated and operated IDC’s Student Union Israeli advocacy situation rooms during operations Pillar of Defence (2012) and Protective Edge (2014). More than 1,000 volunteers worked 24/7, using over 35 languages, reaching tens of millions around the world, presenting the Israeli civilians' side of the story. At the end of 2014 the Time magazine published a list of the most influential social media campaigns of the year, and IDC’s campaign ‘IsraelUnderFire’ was one of them.
In light of the situation rooms’ successes, IDC and the Israeli-American Council (IAC) joined forces to establish Act-IL, a community of activists that would work together to support the State of Israel on social media platforms.

Today the organization boasts 20,000 volunteers from 41 different countries, and seven branches in American-Jewish communities across the United States. Times of Israel recently described Act-IL as “one of the fastest growing and most effective Israel advocacy groups ever,” and in July 2019 the BDS organization acknowledged the project as “the most sophisticated campaign against them so far”.

As part of his positions in the academic field, Yarden is among the founders of the honors track Public Diplomacy program at IDC and serves as the Director of the initiative’s internship program.

Yarden is considered a world expert in cognitive influence operations and a pioneer using the method of crowdsourcing and collective actions in this field.

In 2018, Yarden was featured in Forbes Israel’s 30 Under 30 list of bright entrepreneurs.