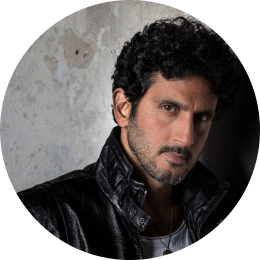 Musician, Singer, Creator, and Actor. Winner of the 2013 Ophir Award for Best Supporting Actor in "Bethlehem"

Tsahi Halevy is a musician, singer, creator, and actor known for the political-thriller television series, “Fauda.” In 2013, Halevy starred in the drama film Bethlehem, Ophir Award winner for Best Picture. Halevy's breakthrough came in 2012, when he took part in the first season of the reality show “The Voice” Israel.

Halevy served in the Israeli Defense Forces as an undercover special forces Samson Unit, and later served as an officer in the elite special operations force Duvdevan Unit.

Halevy is also one of the main characters in the documentary “The Real Fauda” with Omri Assenehim.