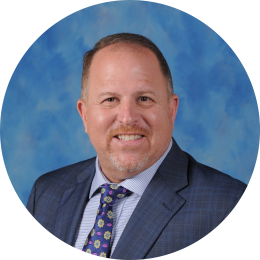 Scott has been part of the JCC movement for over 26 years. He served for 18 years in various capacities at the Michael-Ann Russell JCC in Miami before coming back to his hometown nine years ago to serve as CEO for the David Posnack JCC.  Scott graduated from Barry University in Miami with a Master of Arts degree in business/human resource development and administration. He is a graduate of the American Express CEO’s Leadership Academy and the FBI’s Citizen Academy.

Scott served as the Team USA Masters Tennis coach for the 20th Maccabiah Games in Israel. He was instrumental in David Posnack JCC being selected as a venue/host for the 2015 JCC Maccabi Games and served as a coach and delegation head for the Games throughout the past 25 years. Scott is the current co-chair of the National Special Needs Initiative of the JCC Association of North America.

His wife, Ana, whom he met at the JCC, serves as vice president of communication for the Jewish Federation of Broward County; son Brenden works at Ultimate Software and is completing his MBA at Nova Southeastern University; daughter Haley is a second lieutenant in the United States Air Force and is on a full scholarship in the M.D. program at Nova Southeastern University; daughter Olivia and son Joey attend David Posnack Jewish Day School and participate in the travel basketball program.

Scott and Ana, along with their kids, are very passionate about their JCC roots. They strongly believe in giving back to the community and volunteer their services, individually and as a family, to many community projects.