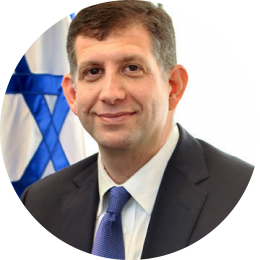 SAM GRUNDWERG was appointed Consul General of Israel in Los Angeles by Prime Minister Benjamin Netanyahu in April 2016, and assumed the post in August 2016. Mr. Grundwerg is the senior representative of the State of Israel to the Southwestern United States.

Immediately before becoming Consul General, Mr. Grundwerg served as Director General in Israel for the World Jewish Congress (WJC), an international organization representing Jewish communities in over 100 countries to governments, parliaments and other international organizations. As the head of WJC's operations in Israel, Mr. Grundwerg advanced the overall mission of the WJC to strengthen and support Jewish communities around the world, as well as the State of Israel and the Jewish People.
Before joining the World Jewish Congress, Consul General Grundwerg worked as an attorney at a major international law firm in the United States and held positions in the fields of law and finance in the U.S. and Israel. He earned his Juris Doctor degree from the University of Miami School of Law and holds an M.B.A. in finance from the University of Miami School of Business, as well as an undergraduate degree from Bar Ilan University

.Originally hailing from Miami Beach, Florida, Grundwerg fulfilled a lifelong dream and moved to Israel in 1990 and made Aliyah soon afterward. Once in Israel, he served as a combat soldier in the IDF armored corps, and later in the IDF reserves as a casualty officer.
Mr. Grundwerg is married to Julia, a nurse. The couple has three children, Elisha, Felicia and Sarita.

The Consul General is an avid sports fan and enjoys biking in his spare time.