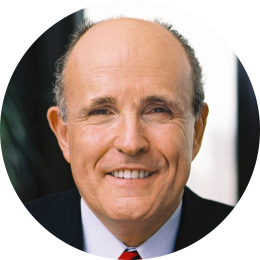 After joining the office of the United States Attorney for the Southern District of New York, Rudy Giuliani rose quickly through the ranks, becoming the Chief of the Narcotics Unit at age 29.

In 1993, he was elected Mayor of the City of New York and focused on reducing crime, reforming welfare, and improving the quality of life.  Under his leadership, overall crime was cut by 56%, murder was cut by 66%, and New York City—once considered the crime capital of the country—became the safest large city in America according to the FBI.

On September 11, 2001, having narrowly missed being crushed when the Twin Towers fell as a result of terrorist attacks, Mayor Giuliani immediately began leading the recovery of the city as it faced its darkest hour. He was named “Person of the Year” by TIME magazine, knighted by the Queen of England, dubbed “Rudy the Rock” by French President Jacques Chirac, and former first lady Nancy Reagan presented him with the Ronald Reagan Presidential Freedom Award.

In January, 2002 he founded Giuliani Partners, a professional services firm. In May of 2003, Mr. Giuliani married Judith S. Nathan.  She was a Founding Member of the Board of Trustees of the Twin Towers Fund, which raised and distributed $216,000,000 to over 600 recipients.

In January 2016 he joined the international law firm Greenberg Traurig as Global Chair of Cybersecurity and Crisis Management Practice and Senior Advisor to the firm’s Executive Chairman, Richard A. Rosenbaum