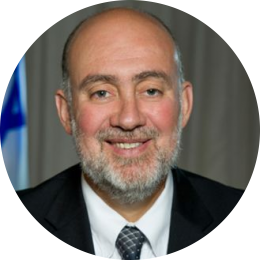 Israel's former Ambassador to the UN, Abba Eban Chair in International Diplomacy and a Distinguished Fellow at the Hudson Institute

Ambassador Ron Prosor became Israel's 16th Permanent Representative to the United Nations in June 2011. With over two decades of experience at the Ministry of Foreign Affairs, Ambassador Prosor has earned an international reputation as one of Israel's most distinguished diplomats. He served for nearly four years as Israel's Ambassador to the United Kingdom and served as the Director General of the Ministry of Foreign Affairs ('04-'07), overseeing the work of the Foreign Ministry during the disengagement from Gaza in 2005.

Ambassador Prosor was instrumental in establishing diplomatic relations behind the Iron Curtain following the fall of the Berlin Wall in 1989. He was also a member of Israel's delegation to the Wye River Summit talks in 1998. Ambassador Prosor served in Washington from 1998 to 2002 as the Minister-Counselor for Political Affairs at the Israeli Embassy during the transition from the Clinton to the Bush administrations in 2000.

As an officer in the Artillery Division of the IDF, Ambassador Prosor attained the rank of Major and is a graduate of the IDF Battalion Commanders. He also holds a master’s degree in Political Science from the Hebrew University of Jerusalem, graduating with distinction.