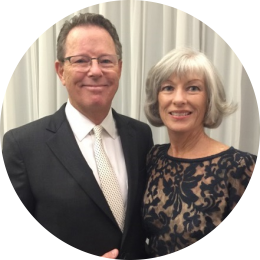 Mr. Stuart Force has a distinguished record of service to our country. From 1973-1982, he served as an Officer and Pilot in the United States Air Force and the Colorado Air National Guard. After retiring from the Air Force, Mr. Force was a commercial pilot for Southwest Airlines until his retirement in 2009.

Mr. and Mrs. Force were instrumental in passing vital legislation aimed at ending the Palestinian Authority's policy of financially rewarding Palestinian terrorists. The bill, known as the Taylor Force Act, was named in honor of the Forces' son Taylor who was tragically murdered by a Palestinian terrorist while in Israel in 2016. Since then, Stuart and Robbi have dedicated themselves to honoring their son's memory by working to enact meaningful reform through efforts like the Taylor Force Act.