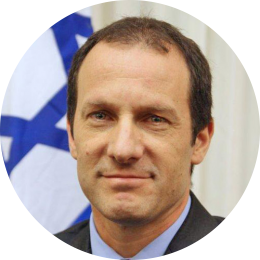 Reuven Azar assumed his position in Washington, DC in January 2014. He previously served as Head of Middle East Research in the Israeli Ministry of Foreign Affairs (MFA). From 2010-2012, Reuven was the Deputy Head of Mission at the Embassy of Israel in Amman.

Since the completion of the MFA cadet training program in 1994, he held mostly Middle East related positions, such as Head of the Iran Sanctions Team and Director of Middle East Economic Research. During his carrier Reuven covered different aspects of cooperation and negotiations with the Palestinian Authority, as well as research on Palestinian issues. He served four years in Cairo as Head of Economic & Trade Department at the Embassy of Israel. In a previous round in Washington, DC (2003-2006) he served as Counselor for Political Affairs.

Reuven served in a Paratroopers battalion of the Israeli Defense Forces from 1985 to 1988 and was a reservist combat Sergeant up to 2008. Reuven has both an MA and BA from the Department of International Relations at the Hebrew University in Jerusalem.