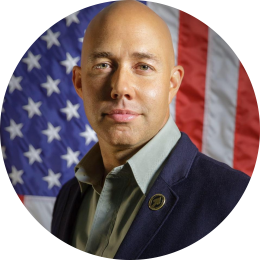 Congressman Brian Mast is in his first term representing the 18th Congressional District of Florida.

Prior to his election to Congress, Brian followed in his father’s footsteps by serving in the U.S. Army for more than 12 years, earning medals including The Bronze Star Medal, The Army Commendation Medal for Valor, The Purple Heart Medal, and The Defense Meritorious Service Medal. While deployed in Afghanistan, he worked as a bomb disposal expert under the elite Joint Special Operations Command. The last improvised explosive device that he found resulted in catastrophic injuries, which included the loss of both of his legs.

While lying in bed recovering at Walter Reed Medical Center, Brian’s father gave him advice that has stuck with him to this day--to ensure the greatest service he gave to our country and the best example he set for his children was still ahead of him. Brian took this advice to heart and dedicated himself to finding new ways to serve our country and his community.

Brian remained on active duty following the injuries and provided expertise to the National Nuclear Security Administration and the Bureau of Alcohol, Tobacco & Firearms during his recovery process. After his retirement from the Army, he continued working in counter-terrorism and national defense as an Explosive Specialist with the Department of Homeland Security. Brian subsequently received a degree from the Harvard Extension School and volunteered to serve alongside the Israel Defense Forces to show support for the freedom Israel represents throughout the Middle East and the world.

In Congress, Brian strives to serve as he did on the battlefield: without regard for personal gain or personal sacrifice. He is a member of three committees:

• The Transportation and Infrastructure Committee, where his priorities include fixing the pressing water quality issues stemming from Lake Okeechobee;

• The Foreign Affairs Committee, where he uses his military expertise to help strengthen the safety and security of the United States; and

• The Veterans Affairs Committee, where he uses his firsthand experiences at the VA to increase accountability and improve care for his fellow veterans.