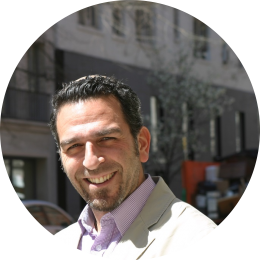 Rabbi Leor Sinai, a child of Israeli immigrants, born in New York, made aliyah with his family in 2011.  Leor is an alumnus of Tzofim - Israel Scouts - Shevet Tzabar NY, a madrich & alumnus of Chetz VaKeshet (twice 1990-1992<tel:1990-1992>).  His resume includes Jewish National Fund, the Dan Hotels of Israel, The Jewish Lens, Hillel Israel, and The Jewish Agency for Israel. Leor was ordained in 2009 at The Jewish Theological Seminary and works passionately to build networks of Jews worldwide with Israel at their center.

Leor began his tenure at Alexander Muss High School in Israel (AMHSI) in October 2013. He lives in Tel Aviv with his wife and three children.

AMHSI’s mission is to promote, build and strengthen life-long bonds between youth and Israel through study of the history and culture of Israel. The only non-denominational, pluralistic, 8-week, English language academic experience in Israel for high school sophomores, juniors and seniors, AMHSI instills in its students a lifelong sense of pride in their Jewish heritage by strengthening Jewish identity while developing deep-rooted connections to Jewish life, to the Jewish people, and to Israel. AMHSI has been an important contributor to the leadership and educational fabric of the North American Jewish community and boasts more than 29,000 alumni—many of whom are active leaders in their Jewish communities today.