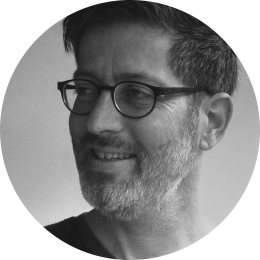 Prof. Adi Stern (b. 1966) is the President of the Bezalel Academy of Arts and Design, Jerusalem. He is a graphic designer, type designer and a design educator. He served as the Head of the Visual Communication department at the Bezalel Academy from 2008-2015.
Adi's field of expertise is typography and typeface design. He writes, consults and lectures on the design and history of the Hebrew letter.

Since 1994 he has run his own leading visual communication studio, specializing in design for cultural institutions, as well as in book design and typography.
Adi was a selected artist of the Israel Cultural Excellence Foundation and the recipient of the Israeli Ministry of Education and Culture Design Prize.

Many of his works have been exhibited internationally and have won awards worldwide, including the Tokyo Type Directors (TDC) Award and the New York Art Directors Club Silver and Bronze awards.
His work received recognition also from the Type Directors Club New York, Design and Art Direction (D&AD) London, International Society of Typographic Designers (ISTD), London and the Society of Environmental Graphic Designers (SEGD).