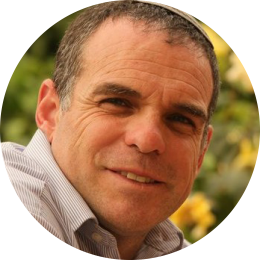 Oded Revivi is a statesman, orator, lawyer, mayor and prominent advocate for the Israeli communities in Judea and Samaria. He is also a staunch advocate of co-existence and fostering improved relationships with Efrat's neighboring Palestinian villages.  He is a regular commentator in the international press, both broadcast and print, and is frequently called upon to participate in public debates and panels at major conferences and universities. As mayor of Efrat, the population has grown by over sixty percent, making him one of the most effective leaders in the history of the YESHA Council. The YESHA Council is the official representative organization for the 406,000 Israelis residing in Judea and Samaria. USA TODAY recently described the YESHA Council as "one of the most powerful and effective lobbying groups in Israel”.

Oded began his professional career as an attorney working in several law firms and in 2000 he opened up his own law practice, where he specialized in real estate and business law in addition to litigation.
Prior to becoming a lawyer, Revivi served for 4 and 1/2 years in the Israel Defense Forces Armored Corps as a conscript and subsequently an additional 25 years as a reserve officer attaining the rank of Lieutenant Colonel (Res.). Under his leadership and command, his tank regiment received the President of Israel’s Prize for Excellence.

In July 2016, Revivi was appointed Chief Foreign Envoy of the YESHA Council, heading the newly reinstated Foreign Affairs Department of the YESHA Council and acting as the official political representative of the Israeli settlement movement to the international community. Despite his new role to the international community, Revivi still serves as Mayor of Efrat after his election in November 2008 and re-election in October 2013. Following his success in Efrat, Oded was chosen to be a mentor for newly elected mayors in a special program initiated by the Ministry of the Interior in cooperation with the Center for Local Government and the Hebrew University School for Public Policy.

Revivi received his Bachelor Degree in Law at from East London Law School and Master's Degree in Social Sciences and Public Policy from the Hebrew University in Jerusalem. He is a graduate of the San Francisco based Gvanim fellowship, that fosters the advancement of religious pluralism in Israel. He completed an Executive Education Program at Harvard Business School with a focus on leadership and management as a Maoz fellow.

In addition to being Chief Foreign Envoy of the YESHA Council and Mayor of Efrat, Revivi serves as Chairman of the Board of Directors of the Local Government Services Insurance Agency of the Center for Local Government and as a board member for the National Lottery.