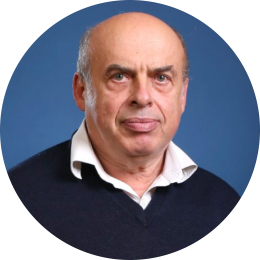 Chairman of the Executive, The Jewish Agency for Israel

Natan Sharansky graduated from the Physical Technical Institute in Moscow with a degree in computer science. After graduating, he applied for an exit visa to Israel, which he was denied for “security reasons”. Very quickly he became involved in the struggle of Soviet Jewry to earn their freedom and emigrate to Israel. At the same time, he joined the human rights movement in the Soviet Union led by Andrei Sahkharov. He became one of the founding members of the Moscow Helsinki Group which united Soviet dissidents of all types.

In 1977, a Soviet newspaper alleged that Mr. Sharansky was collaborating with the CIA. Despite denials from every level of the U.S. Government, Mr. Sharansky was found guilty and sentenced to thirteen years in prison. After nine years of imprisonment, due to intense international pressure and a campaign led by his wife, Avital Sharansky, Mr. Sharansky was released on February 11, 1986, and emigrated to Israel.

Upon his arrival to Israel, Mr. Sharansky continued the struggle for opening the gates of the Soviet Union. The final chapter of this struggle for the release of Soviet Jews was the momentous rally of over 250,000 people on December 7th, 1987, of which Natan Sharansky was the initiator and driving force. Ten years after arriving in Israel, Sharansky founded the political party Yisrael B’Aliyah which means both “Israel on the Rise” and “Israel for Immigration.” In 1988, Nathan Sharansky formed together with other former Refuseniks and Aliya (immigration to Israel) advocates the Soviet Jewry Zionist Forum.

Natan Sharansky served as Minister as well as Deputy Prime Minister in four successive Israeli governments (1996-2005). In November 2006 Natan Sharansky resigned from the Israeli Knesset and assumed the position of Chairman of the newly established Adelson Institute for Strategic Studies at the Shalem Center in Jerusalem. He is also the Chairman of One Jerusalem and Beth Hatefutsoth, the Jewish Diaspora Museum in Tel Aviv.

In 2009, Natan Sharansky was elected Chairman of the Jewish Agency for Israel. Natan Sharansky was awarded the Congressional Gold Medal in 1986 and the Presidential Medal of Freedom in 2006. He has continued to lead human rights efforts both through his writings as well as public activities.