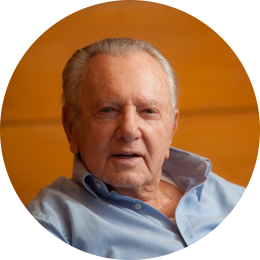 Morris Kahn -born in South Africa in 1930 to humble beginnings. In 1956 at the age of  26, he moved to Israel with his late wife Jacqueline and his two sons, David and Benjamin.

Foresight and business acumen were key to achieving his first large-scale success in the business world with the establishment of Israel’s Golden (Yellow) Pages in 1968. Six years later, Morris opened the first World underwater observatory in Eilat –. In 1978, Morris co-founded the Aurum Group, and proceeded to establish companies in diverse fields, Golden Lines and Golden Channels, and was instrumental in the entry of global corporations AT&T and AIG into the Israeli market.

In 1980 Morris co-founded Amdocs, which served as the foundation upon which Israel later built itself as ‘The Startup Nation’. His large-scale, diversified business activities contributed to the development of the Israeli economy and created thousands of jobs.

In recent years Mr. Kahn has increasingly focused his attention on philanthropy and venture philanthropy, he supports, among others, cutting-edge cancer stem cell research, including the establishment of a laboratory for fertility preservation among cancer patients in Tel Hashomer.; a biomedical research laboratory focusing on genetics and genetic mapping;. The most recent collaboration was establishing the Morris Kahn & Maccabi health data institute to enhance human health by providing a technological platform that will support medical breakthroughs in the fields of predictive analysis and precision medicine. Morris serves as the president and is the main donor of Space IL an NGO aiming to make history and landing the first Israeli spacecraft on the Moon in 2019.

Mr. Kahn supports several initiatives that are dear to his heart.

Making cataract and Trachoma surgery available to Ethiopian villagers; operating a therapeutic horseback riding center for the disabled.  He is a major donor at Save a Child's Heart, an NPO for life-saving cardiac surgery for children from developing countries.

Today, at the age of 88, with his grandchildren and great-grandchildren by his side, Morris continues his far-reaching philanthropic activity modestly, and with the same sparkle in his eye as the young Zionist entrepreneur. His exemplary leadership has inspired generations of entrepreneurs and young dreamers. His desire to do good for humanity and to ensure the prosperity of the world continue to be his guiding principles.