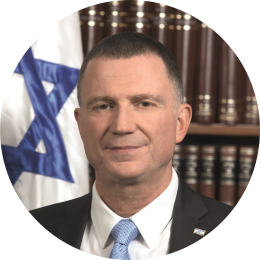 Speaker of the Knesset

Yuli Yoel Edelstein was born in Czernowitz (former Soviet Union). He was active in Zionist circles in Moscow where he fought for the human rights of Jews to leave the Soviet Union and for their right to practice their religion as they saw fit. As a result of these efforts, he was arrested by the KGB on trumped-up charges in 1984 and sentenced to 3 years in a labor camp. Following his release in 1987, he emigrated to Israel with his family.
After his emigration, Edelstein completed his education through the Mandel Jerusalem Fellows program and worked in a number of educational institutions.

During his terms as Speaker of the Knesset, Edelstein has taken many steps to make the Knesset a leader in important fields such as sustainability, parliamentary transparency, and accessibility. In order to enhance the standing of the Knesset, he established the Parliamentary Oversight Coordination Unit to increase oversight of the Government and set question times for Government ministers in the Plenum, among other steps.